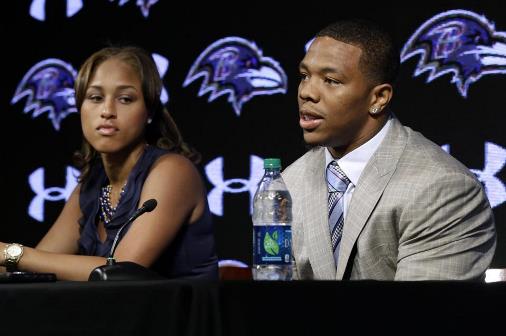 But what we see playing out on TV is happening too many times in America and across the world today. Women being beaten, raped, and violated by men, often men who are closest to them. To me, Ray Rice is a public face to a deeprooted societal problem that we must all face. There is no excuse for domestic violence. I work with women, I am a woman, I have three sisters, a daughter, six nieces (as of today) and violence against women is something I personally feel very strongly about. I also understand that many women who are abused learn to live with it – in fear, and in silence.

How did I hear about the story? I don't get to watch TV that much and when I do, it's usually not the news. As I was heading to bed last night, my husband was watching … I kept hearing "Ray Rice", "video", "nfl", etc, so I asked hubby what the story was. As he recounted it, the first question out of my mouth was, "is she [the victim] black?"

I have noticed that "black men" tend to treat their women worse than any other race does (Huffington Post: Black Women Face A Greater Risk Of Domestic Violence). A fundamental lack of respect for the black woman is intrinsic in the psych of many black men … either because they have been raised to resent females, or because of cultural values that have made them feel superior (DUNIA Magazine: 5 Reasons Why African Men Make Good Husbands).

While many black men fail to respect black women, they would NEVER lay a finger on a white woman (Read my article: 4 common abuses African Women Suffer at home).

Brainwashed, weak, uncivilized and mentally sick is how I personally feel about any man who would stoop to such a low as Ray Rice did. I pray that the beautiful woman involved in this situation gets all the support and love she deserves, and most especially the understanding that she is not at fault. I also pray for all women living in fear of a violent partner.

Domestic violence and discrimination against women is why we take the work we do at Women Are Core so seriously … we are the voice for voiceless women, women who are not being heard, whose cries are muffled by pillows of helplessness, hopelessness and pain.

There will be alot of talk about the Ray Rice incident during these next few days, I hope that everyone looks inward and faces themselves. If you have the habit of degrading another human being by yelling, insulting, kicking and punching them; or you feel the need to control your spouse in any way, GO GET HELP!

Ray Rice is being ostracized in public, many men are abusers behind closed doors and may never be exposed.

In closing, please permit me to share video of the incident.

"The video shows Janay Palmer, now Rice's wife, being hit in the face in the elevator. Palmer then lunges at the running back before he delivers a blow that knocks her out. When the elevator doors open, Rice drags Palmer's body outside, leaving her face down on the floor, her legs still inside the elevator." – ABC News

2014-09-09
Previous Post: The wisest thing one can do sometimes is simply to let life happen
Next Post: We don’t have all the answers, but we’re still “marching on”