An Evening With ISAIAH WASHINGTON … What you can expect

“DUNIA Magazine cordially invites you to an event we will be hosting
on August 31, 2013, titled ‘An Evening with ISAIAH WASHINGTON’. Our
theme for the night will be “Bridging the Gap”. This will be the first
in a series of annual conversations between Africans and African
Americans.” 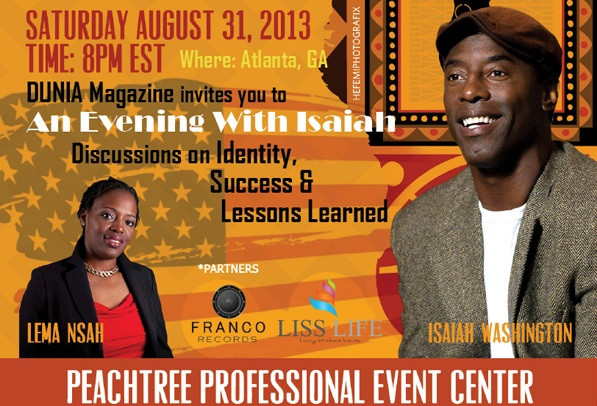 Have you heard yet? As the publisher of DUNIA, a publication that connects across cultures, I am beyond excited about our upcoming event AN EVENING WITH ISAIAH WASHINGTON on August 31, 2013 in Atlanta, GA.

I was on the phone with a friend of mine this morning … who by the way will be flying in from D.C. for the event and she asked, “So, what can we expect on August 31st?”

I am sure you would like to know as well. One thing is for sure, it’s not going to be your average everyday party … you can think of it as an evening of many things for guests from across different cultures. Most importantly, we will be officially launching DUNIA Mag, founded in August of 2010.

As you may know, back in August of last year, we interviewed Award Winning Actor Isaiah Washington for the 9th Edition of the magazine; not long after that, I read his book ‘A Man From Another Land. How Finding My Roots Changed My Life“. It became very clear to me that there’s more to Mr Washington than the talented actor we all know him to be … he is an African American with a remarkable story, one who has been on a journey that started many years ago of finding himself and making a difference.

From his book I learned that all his life Washington had always been mistaken for an African born on the continent. Africans he met on the streets of the U.S.A always wanted to know, “Where are you from? Are you Wolof?”

“No, I’m from Houston, Texas,” he would answer.

… and they would snicker in disbelief, thinking, Well, he’s one of those who do not want to admit they’re African. Many a times he was mistaken for a Senegalese.

Physical appearances aside, Washington has always had a special place in his heart for Africa and when he finally traced his roots back, DNA would indicate his ancestry to be from Sierra Leone of the Mende and Temne people. It gets more interesting. In 2006, upon his visit to Sierra Leone seeking to connect with the land of his ancestors, Isaiah was made CHIEF! Yes, a traditional African leader. Isaiah went on to build a school in his village and has since then been very much involved in issues concerning Africa. In fact, Washington was a part of the Atlanta Million Woman Walk for CONGO organized by DUNIA Magazine that took place last month on March 23; his participation noted by Keli Goff of The Root in article: War in the Congo: Are Black Americans Ignoring the Crisis?

As an African who over the years has interacted with many, many African Americans as clients and friends, I have also come to the realization that there are indeed stereotypes that keep us apart, but once we move pass these, we truly are the same at the core. There are walls, there are misunderstandings, there’s ignorance between us, but there’s also curiosity, there’s love and there’s that need to reconnect and rediscover.

This is the foundation on which ‘An Evening with Isaiah Washington‘ is organized. To bring us together to discuss our experiences, our expectations; to ask each other questions and seek a better understanding; to celebrate each other and what we all bring to the table.

It is going to be an evening of many different flavors and cultural blends. In the program you’ll have entertainment – live musical and poetry performances; lots of music – so put on your dancing shoes; a variety of foods … and guests from across the country.

We also like to give back. 3 charities will receive a donation from DUNIA Magazine. Awards will also be presented to individuals who are making a difference in our communities.

… and hey, Isaiah will be celebrating his 50th in August, who says Team Dunia does not have a surprise up our sleeves for this son of Africa’s?!

We hope you join the discussion and get to meet many other special guests. Amongst us will be Cameroonians, Americans, Sierra Leone-ans, Nigerians, Congolese, Ghanaians, Togolese and hey, Swedes and Finns.

Tickets are selling now and going fast. Seats are limited. There will be no selling of tickets at the gate. You can secure yours now.

I would like to thank our partners Franco Records and LISS Life.

2013-04-23
Previous Post: A Strong Support-System: Why We All Need One
Next Post: 19 Bible Verses to Inspire You from Good News Club