Why Victoria Azarenka is a Champion 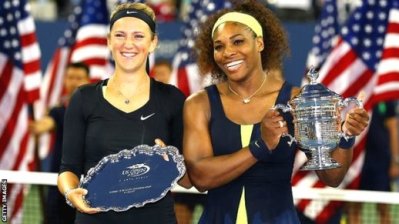 Serena is my favorite tennis player on the female side, but I must say, Victoria Azarenka, fondly known as Vika, has captured my heart as well.
Vika, the world's female number 1 tennis player from Belarus, today took on Serena in the finals of the U.S. Open and played her heart out. After losing the first set 2:6 to Serena, Vika fought back, managing to break Serena's powerful serve, which is considered to be the best ever in the women's game. In a captivating match full of breathe stopping moments, it came down to the last game of the 3rd set with Serena capturing the crown when she broke Azarenka at 6:5 to win.

I was impressed by Azarenka's gutsy and bold performance, as she went toe-to-toe with a player who has done nothing short of dominate the female game these past months. She believed in herself and came out swinging, expecting to win.

Liz Clarke of the Washington Post puts it brilliantly: After breezing into Sunday’ s U.S. Open final without facing a credible challenge, Serena Williams ran headlong into a woman who hits as hard, competes as fiercely and wanted to win the season’s final major as much as she did.

Victoria Azarenka
shook off her first-set jitters to stand up to Williams’s vaunted
serve, yanked the American from one side of the court to the other and
forced her into a rash of uncharacteristic errors.

Although Serena was favored to win by most, the truth is, this game could have gone either way. This in itself is very impressive considering the fact that the veteran had not lost a set since this tournament began. In fact, since losing in the first round of the French Open earlier this year, Williams has recorded 26 wins to 1 loss, including winning Wimbledon, and the London Olympics gold. "I honestly can't believe I won," said Serena after, "I was preparing my runner-up speech because she was playing so great."

Lesson learned? Effort counts. We don't always have to top the charts or emerge on top to be considered winners. Hard work and purely gutsy performances is what winning is about. When you give it your all, fight for your dreams and defy the challenges you face, you are a champion!

Weeping at the end of the match, Azarenka still was able to muster the courage and charm to applauded her opponent for a great performance. "It's tough but Serena deserves to win. She showed what a true champion she is… I'm honoured to stand with such a true champion here. I
definitely gave it my all today, stepping out of this court I have no
regrets."

The 23 year old Belaruse obviously has great things ahead of her. Meanwhile, 30-year-old Serena continues to write her name in the history books as one of the greatest female tennis players that ever lived. This is her 15th grand slam title. Azarenka has won 1…so far.

2012-09-09
Previous Post: Capitalise on Google+ Vanity URLs as Soon as They Are Available
Next Post: 7 Ways to Raise Your Self-Confidence Levels