THE CONFESSION by John Grisham 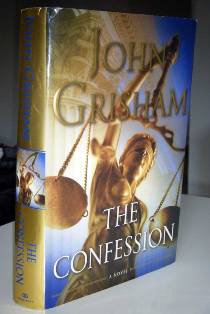 ”An innocent man is about to be executed. Only a guilty man can save him.”

These are the words of John Grisham, in his book: The Confession.

Many works of fiction fail to capture my imagination, but a legal thriller, my favorite book genre, always does. This explains why books by John Grisham, a former practicing criminal lawyer, always beacon on book shelves. The Confession is the acclaimed writer’s most recent book – as of the time of writing this review.

The Confession, a work of fiction, tells the story of a broken legal system in a small town in East Texas, United States. It is the story of a young African-American male college football (not soccer) player arrested and convicted of murder in 1999. The  innocent man is found guilty and sentenced to death for a crime he did not commit. For his defense attorney, family and anti-death penalty groups, it is a race against time to save his life.

Three days before the execution of the innocent man, a carreer criminal shows up and claims responsibility for the murder.

Would the authorities welcome this new twist in this sensitive case and admit their mistake?

Would the authorities admit that they have imprisoned an innocent man for nine long years pending execution?

More importantly, would a stay of execution be ordered?

The execution is scheduled for 6pm on a Thursday and the deadline to file an appeal to stop the killing machine is at 5pm – when the doors of the office of the Chief Justice close for the day. At 4:45pm on that fateful day, the defense team, armed with a new petition and sworn affidavit, sets out for the office of the Chief Justice to file a last minute appeal. Of course, this move by the defense team showcases legal representation at its best! But would ”last minute Hail Marys” save an innocent man from a powerful state-sponsored killing machine?

After reading this thriller, I have the answers to all the above questions, but you would have to find out the answers yourself by reading the book.

I like the fact that the author clearly shows the demerits of the death penalty – a form of punishment which I’m ideologically against. The author also portrays the innocent convict’s defense lawyer as a fighter who stands shoulder to shoulder with his client till the last minute and refuses to give up hope even in the face of what appears to be an ”impossible mission.”

Some critics have argued that the story ”lacks realism.” I disagree.

The Confession captures the reality of wrongful convictions in the United States and beyond. I found myself unable to put the book down once I started reading.

Like me, you can purchase this book from Amazon.com.