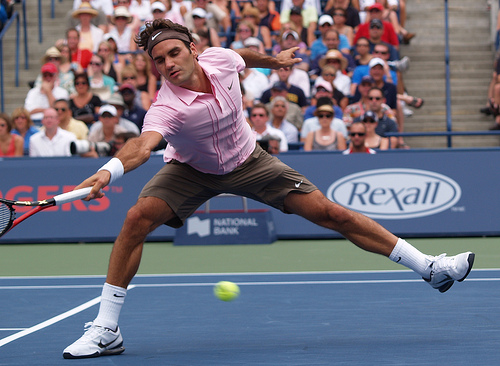 Acccording to wikipedia, the word maestro is 'a title of extreme respect given to a master musician'. I, like many tennis fans would agree that this word ought to be borrowed by the tennis world to describe a gentleman who has stayed at the top of the game more than any body else in the history of the open era; his name is Roger Federer .

Roger Federer was born on August 8 1981 to Robert Federer, Swiss, and South African mother Lynette Their. He and older sister Diana (born 1979) grew up in the town of Munchenstein, just outside the city of Basel. Roger speaks German, French, English and Swiss German (a type of dialect).

Tennis was a family sport they all enjoyed, but it became clear at an early age that Roger had a special talent. By age 11, he was among the top 3 junior tennis players in Switzerland. 3 years later, he would hold the title of National Junior Champion in his country. The young Federer focused on his game, fueled by inspiration from his favorite tennis players (heros)  Boris Becker and Stefan Edberg .

On his way to the top, he joined the International Tennis Federation Junior Tennis Circuit in 1996 and two years later in 1998, he won the junior Wimbledon title.

It was time to turn pro; which he did later that year. He was 17.

Federer would be noticed by the tennis world when in 2001, the 19 year old would take out defending champion Pete Sampras at the quarterfinals at Wimbledon – grass still remains his favourite surpface. He would go on to capture his first Grand Slam in 2003 at Wimbledon to become the first Swiss man to win a Grand Slam title.

But there was a side to this genius that needed some tweaking. To improve his game, his coaching team had to figure out a way to tame his wild temper. Although not known to yell at the referee or lines people, the young Federer was pretty well known for angry out bursts on the court aimed at himself; uncountable times he smashed his raquets around and swore at himself … a behavior that concerned his parents. But with some help, especially from former ATP pro Swede, Peter Lundgren, Roger learned how to gain more ‘self-control’.

Difficult to imagine this part of Roger when you watch him these days … he epitomizes coolness, focus, and class … a 360 degree turn from that ‘hothead’ as he has described himself. This boiling rage turned into a burning desire to win and a fierce passion for the game that would lead him to become an icon in his own right.

The greatest of all time

Never in the history of the game has any player broken so many records. Once he took over, he refused to let go; Roger Federer held the number 1 ranking for 237 consecutive weeks a thread that would be broken by Raphael Nadal in 2008.

He is one of 7 men in the history of the game and 4 in the open era  (including Rod Laver, Andre Agassi and Rafael Nadal) who have won a Career Grand Slam i.e. titles on all four surfaces – Australian, French, Wimbledon and US Open. 5 women who have done this in the open era are Margaret Court, Chris Evert, Martina Navratilova, Steffi Graf and Serena Williams.

Since 2003 up until 2010, Fedex Express (as he is fondly known to some) was always either the number 1 or number 2 player in the world, appearing either in the finals or semifinals in ALL grand slams.

The thing that stands out about this champion is not only the trophys he has won, the records he has broken,and those he has created, but how he makes the game seem easy. As a tennis fan, I have watched him 'effortlessly' beat and frustrate top players like Andy Roddick, Leyton Hewitt, and many others — he never seems to break a sweat. Always appearing unfrazzled and clean even on the red clay. It is obvious to all who are looking closely at this guy that his technique is faultless and the quality of his game never before seen.

While representing his country at the 2000 Olympics in Sydney, which he lost in the quarter finals, Roger had met Miroslava Vavrinec, she was a member of the Swiss women’s team; a relationship started that would blossom through the years, leading to marriage in 2009.  Later that year this young couple became parents of twin girls.

The birth of the girls caused his fans and many others to wonder if Roger could still keep his game at such high levels with family responsibilities and all. The relentless grind of the tour has been known to wear out even the toughest of athletes. But Roger would handle this with class and make it seem like a non-issue. Known to often travel with his family especially wife, who is also his PR manager, Roger seems to be doing O.K. Although the star has admitted to being busier, plus a couple of late nights while on the tour when the babies kept him up, he still finds a way to stay motivated and focused.

A new kid on the block!

A shadow behind Federer and Raphael Nadal, heavy hitter Novak Djokovic rose to the number 3 ranks and hit the glass ceiling. The top guys were unconquerable … everyone in the locker room knew. Yet, this young Serb was determined.  With a big game, clean shots and power on his side, Novak still believed there was room for improvement. Known to be somewhat cocky with a penchant to tick off the crowd, this young serb would go to work, improving and polishing up both in his game and attitude.

The ceiling would begin to crack some when in 2007 he got to the U.S.Open finals, only to beated by Federer. But in the first Grand Slam of the next year 2008, he would capture the Australian Open — really to no one's surprise considering his talent as a top player; that would make Novak the first tennis player  besides Raphael Nadal and Roger Federe to win a grand slam since 2005.

At the end of 2010, Nole would lead his country Serbia to win the Davis Cup. Then followed a phonomenal 43 match win streak that stunned the world with top player Rafa and Fedex falling to him several times; we even went as far as beating Raphael Nadal 2 times on his beloved clay leading to the French Open; earning him title of the ‘best tennis player this year’.

Versatile, armed with the best return of serve in the men’s game, unstoppable and now unbeateable, #2 player Novak faced off with now #3 Roger Federer in the men’s semi final match at the French Open today.

The world watched, many wondered if revered champion Fedex still had it in him to beat this new kid on the block on such a big stage – a Grand Slam. On the line, for Federer was his credibility, as pondents felt he has to be on a downward slide; for Novak, the number 1 title and a chance at taking another grand slam at Roland Garros.

What do they say about champions? They dig deep whenever they have to. Federer with dreams of becoming number one again, took out Novak in 4 sets and the world of tennis stood amazed at this champion who just continues to marvel, holding off Novak's childhood goal of becoming #1 player in the world just a little longer and sending a signal to the world "I am Roger Federer!" … the ONLY man to beat Novak this year so far. He had found an answer to the puzzle, an antidote to Novak's onslaught.

The indelible mark of a newbie dulled a little bit today, Novak still has to earn the top position by working a little bit harder. Don't we all?

And so, the tennis master, our maestro Roger Federer moves on to the finals, to meet with the King of Clay, Raphael Nadal, a young man who has taken 5 of the last 6 French open titles — both champions are determined to win. Will Rafa claim his 6th French crown or will Fed sing another sweet song on clay? Who will it be? Federer, tennis maestro or Nadal, king of clay? This story will be completed at Roland Garros this sunday … we will be watching.

Today, I marvel at a champion who continues to give, continues to fight, continues to believe and continue to rise … against the odds. A master whose influence will never be forgotten. Roger Federer is truly an icon.