Henry Ford (1863-1947) was born of a father from Ireland and a mother from Michigan who was the youngest child of Belgian immigrants. Ford was devastated when his mother died in 1876. His father expected him to eventually take over the family farm but Henry despised farm work. He told his father, "I never had any particular love for the farm—it was the mother on the farm I loved." A few years later, he left home to work for a machinist in Detroit. Three years later, he returned home. During this time, he had developed a reputation for working on machines.

“I will build a car for the great multitude.” 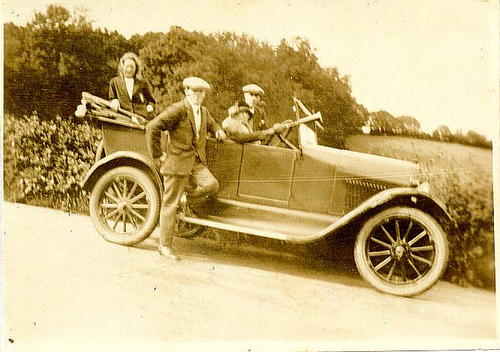 In his late twenties, Ford joined the Edison Illuminating Company in Detroit as an engineer. He had decided to dedicate his life to industrial pursuits. Over the next years, he conducted personal experiments on internal combustion engines. And in 1896 at the age of 33, he completed his self-propelled vehicle. It was called The Quadricycle: with four wheels, it was steered with a tiller like a boat. It had two forward speeds and no reverse. He was one of several pioneers who helped America become a nation of motorists.

The Ford Motor Company was incorporated in 1903, after two unsuccessful attempts to establish a company to manufacture automobiles. Henry Ford was the vice-president & chief engineer.

In 1908, the Motor Twas produced. It was reasonably priced, reliable and efficient. It was easy to operate and maintain. A new era of transportation (the Motor Age) was born –Henry Ford’s dream had come true. The Model T evolved from a luxury item for the well-to-do to an essential item for the average person. By 1981, half the cars in America were Model Ts.

In order to meet up with the growing demand for the Model T, Ford's company revolutionized manufacturing in many ways. It transitioned from the early years when they could only produce a few cars a day using components made to order by other companies to manufacturing a car in 93 minutes by using a continuous moving assembly line. Workers remained in place, adding one component to each automobile as it moved past them on the line. This  changed automobile production. Ford's company was now the largest automobile manufacturer worldwide.

1914 – as his profits became larger, Ford raised his workers’ wages to $5.00/day, almost doubling what other manufacturers offered. This he described as profit sharing, rather than wages. He cut their workdays by one hour and thus converted his factory to a three-shift work day.

The Model T was now being manufactured every 24 seconds.

The Reality of a Vision The American society was forever changed. Folks could go anywhere now, economical and social growth was not limited anymore. A National Highway system was being developed to accommodate the rising number of people on the road.

Before his death, Ford Motors was structured into a franchise. Several years later, his dream still lives on. Henry Ford is rumored to have had only about 3 years of formal education.