A MAN WITH A VISION – BILL GATES, LESSONS LEARNT 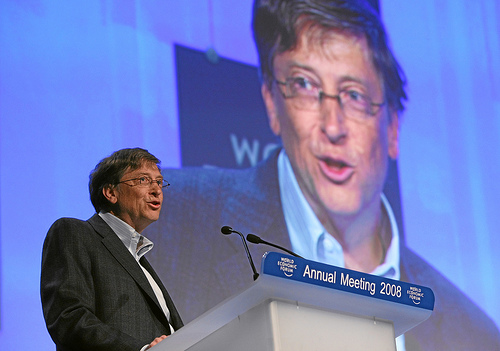 Bill Gates was born in October of 1955 to a father who was a lawyer and a mother who was a school teacher, university regent and chairwoman of United Way International.

Gates attended an exclusive private school called Lakeside School in his earlier years where he took an interest in software and started writing computer programs. He wrote his first computer program on a school GE computer, which allowed students to play games on it. Gates was fascinated by the machine especially how it always perfectly executed software codes. He started spending a lot of time on computers. Students were rationed on how much time they could spend on computers, so Gates and 4 of his friends (including future Microsoft Co-founder Paul Allen) began to exploit bugs in the operating system that would allow them more free computer time.They were caught and banned from the system for sometime.

As administrators became aware of his expertise in programming, they got him to  write the school’s computer program to schedule students in classes. He modified the code so that he was placed in classes with mostly female students. While still at Lakeside, he began to earn free computer time and royalties from payroll programs he had written for companies.

Gates graduated from lakeside in 1973 with what would today be an IQ of about 170. In the fall of same year, he entered Harvard. His interest in software and programming still burned strong. He wasn’t dedicating much time to his studies, but spent most of his time in the company of the school’s computers.

He soon developed a version of the programming language BASIC for the first microcomputer – the MITS Altair. It was time to make a move to start his own computer. He reached out to his friend and old school mate Paul Allen and together, they started Microsoft. That was 1975, Gates dropped out of Harvard to run and devote time to their company.

Anchored by the vision and belief that the computer would become a valuable and useful tool that would sit on every office and residential desktop, the mission of Microsoft was to write user friendly software for those machines. First official location of the company was Albuquerque.

Seize the opportunity when it comes knocking

1980: IBM needing an operating system for its upcoming personal computer (PC) approached Microsoft. Gates referred them to another company which at the time was a well known maker of another operating system. Things did not go well, and the two companies failed to reach a deal. Gates was again contacted for an acceptable operating system. A few weeks later, he proposed QDOA. The system was later adapted fully for the PC and delivered to IBM as a PC-DOS in exchange for a one-time fee of $50,000. Other hardware vendors began to clone IBM’s system, sales of his software went up and Microsoft became a major player in the industry.

In the earlier years of his company, Gates continued to write codes. He also personally reviewed every line of code that the company shipped, often rewrote parts as he saw fit.

His leadership, foresight and vision for personal computing have  been central to the success of Microsoft and the software industry.

His sharp eye to detail and total dedication have continually fueled Microsoft’s mission to advance and improve software technology, and to make it easier, more cost-effective and more enjoyable for people to use computers.

In his own words: "I think it's fair to say that personal computers have become the most empowering tools we've ever created. They're tools of communication, they're tools of creativity and they can be shaped by their user."

More than thirty years after the birth of Microsoft, he ranks consistently as one of the world’s wealthiest people. Admired by many for being one of the pioneers of the PC revolution, criticized by several as well, he is a clear embodiment of In Business, Timing is Everything.

Gates stepped down as chief executive officer of Microsoft in 2000, but remains chairman and chief software architect. He dedicates most of his time these days to work for The Bill and Melinda Gates Foundation. In 2006  alone, Bill and wife gave away $28 billion dollars to charity. Father of 3 children, his main home is said to be in Medina, Washington with a value of $125 million and close to $991,000 in yearly property taxes.

Here are some quotes of his. If he were to speak to us directly, here are somethings he would say:

Common characteristics that we notice in these great men and women (whom we have previously discussed like Oprah Winfrey, Henry Ford, Benjamin Franklin, Abraham Lincoln) all center around consistency, vision, and good work ethic. There is never any short cut to success unless it is inherited, but we all have what it takes if we apply ourselves.