When Man becomes Judge – Eddie Long in the spotlight 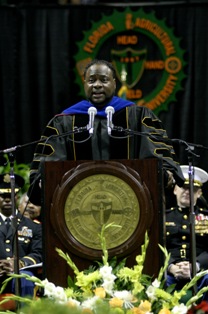 It was the afternoon of thursday Sept 23rd, one of those rare days when I decided to watch some afternoon TV. I started with Oprah at 4pm, immediately following was the local evening news. The first story that flashed was about the lawsuits that had been filed earlier in the week against Atlanta based mega-church pastor Bishop Eddie Long alleging that he had had improper relations with young men whom he should have been mentoring.  In the same news article, they showed images of him visiting his 1.4 million dollar home that day arriving in a dark window tinted SUV, his wife following in a BMW as they sneaked into their home, quickly closing the garage doors to shut out the news media. An overwhelming feeling of disbelief and sadness came over me as first I imagined the pain his family would be going through, and then I started to think – "wow, how could he do this to young men who looked up to him? What a betrayal." Then I went on to thinking, "what if he is innocent?"

A 3rd lawsuit was to be filed by another young man the next day, alledging that Long had sexually abused him on several occasions including while they were on a trip to Africa.

Although this incident has sparked a debate on homosexuality especially because Long was a strong voice against this behavior/lifestyle, the million dollar question remains: Did the Bishop use innocent, voiceless young men to satisfy sexual fantasies in the closet, while publicly denouncing homosexuality? (had the Bishop become the hunter who preyed on the sheep he was supposed to be protecting?) OR is this just an attack against a man of God using the very thing he stood against as the ultimate tool to damage him and bring down his ministry?

Be reminded that Bishop Long became Pastor of New Birth Missionary Church in Lithonia, Georgia (in the outskirts of Atlanta) in 1987, with 300 members at the time. Over the years, he built it into an internationally recognized mega church with a membership of about 25,ooo. He counsels heads of states, he is known to be the spiritual leader for celebrities, his sermons are run on major christian channels worldwide and he has a following that loves and looks up to him, tightly bonded by his influence as spiritual godfather to God's flock.

Charismatic, yes! Criminal … unknown. During these past days despite all the speculation about this incident that has rocked society and the black church especially, with this man of God being tried in the media and pictures surfacing as proof of his guilt, I have personally refrained from passing any judgement as much as it is satisfying to sit on the high chair of judgement for 3 main reasons:

1. 1Chronicles 16:22 – "touch not my anointed and do my prophets no harm." Is Long truly annointed? Well, I would say Bishop Long is a man of God, because he is a teacher/pastor of the Word, a shepherd of his church for all his teachings are bible based. Whether he is real or not, whether he is guilty or not, as christians, let's give God an opportunity to be the judge. Because our God is able, if Bishop preyed on these young men, he will be surely found guilty and this ministry built on a false foundation will be restructured to fit the principles of Yahweh. If Eddie Long is innocent, he will be vindicated and his accusers will come forward and recant their accusations before the whole world for the simple reason that the Word in 1Chronicles 16:22 stands true.  The truth is known to God, Eddie Long and those young men. None of us could possibly tell. The court of public opinion is a dangerous place to be tried. I remember the time when Michael  Jackson was dragged through courts, lost millions of dollars, lost his health, and wept publicly over accusations made against him that he molested young boys, the very children he wanted to give so much to, and to be surrounded by. Years later, long before he was declared 'not guilty' in the court of law, Jackson had already been tried, persecuted, and sentenced in the court of public opinion. That was a lesson learned, never to be forgotten.

3. "I have been wrongfully judged, and so I hesitate to judge others," Lema

Have accusations ever been made against you that you knew where false but which evidence presented by the perpetrators to an un-informed judgemental public proved otherwise? Leaders, active members of society often suffer this demoralizing, painful and often lonely experience … wild accusations thrown at them, a dissection of their lives and motives by the general public.  How about in your day-to-day interactions with family, friends, colleagues, and strangers; have you ever been misjudged, wrongfully accused? Let's just say you were in fact 'guilty', did you wish for forgiveness and some understanding? Such experiences teach us to not rush to judgement of another. Although we are often forced to take positions, to express opinions, let's be guided my principles of love. It's a learning process, especially to me.

And so, although the Eddie Long's story is hot and juicy at the moment, the wheels of time will turn either in his favor or against him. To those who feel hurt, outraged, curious, answers will come with time. Let's remember that there are people and families that are suffering because of this and let's be kind.

Here are excepts of Long's address to the 10,000 gathered at his church New Birth Baptist this morning:

"I am not going to try this case in the media. It will be dealt with in the court of justice."

"I have been accused, I am under attack. I am not a perfect man, but this thing I am going to fight. I feel like David against Goliath, but I have 5 rocks …"

May God help us all!