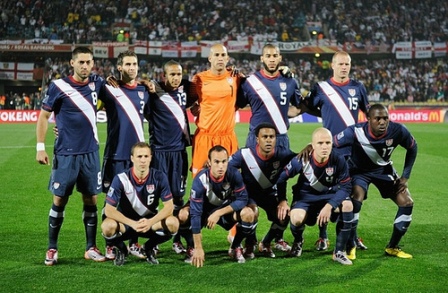 If there are any lessons to be learned as to what Americans
are all about, it is clear from watching their performance so far in
the world cup that the train stops in America. We need to come up with
a new definition of resilience and simply define it as "Americans, the
people who never give up and always believe in themselves, who will
fight until the last minute to be the victor in every encounter." 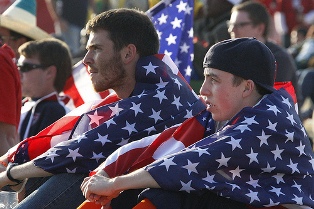 After
a 1-1 draw with England in the first match, team USA went down 2 goals
against Slovenia in the first half of the second game. Staring down the
barrel of a possible defeat, USA regrouped and in one of the most
dramatic matches in this world cup came back firing, equalizing with
the first goal scored by Donovan and the second by Bradley, son of the
coach Tim Bradley. A third goal they scored was denied for reasons
which still remain unknown. Not many times do teams come back from 2
goals down in the world cup. Today's game against Algeria was a must
win for the USA, with a loss or draw, they would not have advanced to
the next round. Again, the team dug deep. As the clock ticked to 90
minutes and the fans began to despair, those 11 players remained
focused and determined. It wasn't over yet in their minds. To the
amazement of all watching, this young team
once again shocked the world with a winning goal in the first minute of
a 4 minute stoppage time. In a truly memorable performance, the United
States team instead of bowing out as losers were now at the top of
their group.

There are so many lessons to be learned here, the one that stands out to me is overcoming adversity. It is easy to say it, but how often do we really pick ourselves back up and
keep going? We live in a world where only the strong survive. However,
looking at the Americans and their performance in this world cup, they
again redefine the meaning of the phrase 'survival of the fittest,'
which to most people means your individual ability to survive when put
in a tough predicament. The question now is, when placed in a situation
where survival depends on group effort or participation, why do most
people fall short? America again is letting the world know that the
reason why they are number one in the world is because they believe in
themselves as a people. They understand how to pull together when faced
with tough situations. Look at how most teams have collapsed and
disintegrated under the pressure of this world cup. From internal
fightings and disagreements to a public display of outright
dys-functionality, teams like Cameroon and France clearly need to learn
a lesson from the Americans. The Americans are a group of not so
well-known players who simply believe in themselves and play as a team.
It is very clear that Donovan who scored the winning goal to save
Americans from elimination is not necessarily being held as the only
hero, the obvious reason being that we all could see the effort of the
whole team, which enabled them to stay in the game and win in the end.
In such an exemplary display of team, Donovan was just the icing on the
cake.

The African teams have real talent and most of them play
overseas, but at the end of the day when they return to play for their
home squads, all they show us is the zeal to shine as individuals
rather than lift the name and banner of their countries. I do not
believe individual talent and lack of team concept will someday award
an African country a world cup trophy. It is an absolute shame that the performance of most African teams in this world cup has been mediocre to say so nicely and outright disappointing to be honest.

In
conclusion, the American team and their accomplishments so far in this
historical and highly dramatic world cup clearly shows that in life the
ability to remain calm, collected, disciplined and believe in each other, while maintaining a sense of pride as a people is how greatness is achieved.

2010-06-23
Previous Post: The Importance of POLITENESS in Relationships
Next Post: A tribute to Michael Jackson – Memories of a light that keeps shinning