“This Time For Africa” – A Time to Shine 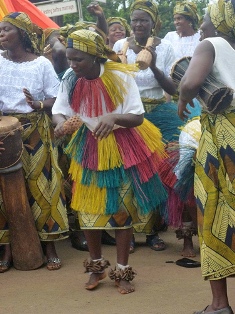 There is a buzz in the African community about the song "Saminamina", official song for the World cup 2010,
by Columbian singer Shakira. I first heard of the song about 2 months
ago, and was excited. I felt both a sense of pride and a lot of nostalgia,
remembering the days when the song played on national television pretty
much every Febuary 11th ( Youth Day), and May 20th ( National Day), as
we were coming from the parades and the country celebrated these
important national holidays. Immediately, I went searching and after
finding the original version
by the group "Golden sounds" on Youtube, I was so thrilled and enjoyed
myself for days, not giving in to the urge of finding out more about
the Shakira version – after all it was just a rumor to me at the time

Meanwhile
there was controversy brewing and talk of plagiarism surrounding the
song. Although the issues concerning the origin of the song seemed to be
well-founded, from the little bit of research that I could do, I found out that Jean
Paul Ze Bella and Didier Edo, two members of the group Golden sounds
(who took the name "Zangalewa", after the song was such a hit in the
80's and beyond), went on record, confirming that although Shakira had
not initially contacted them, they had now reached an agreement ~
source: Cameroononline.org. So why don't we leave it as such
considering it is the Golden Sounds' record, and not ours? Why don't
we let the professionals handle these technicalities and focus instead on other things – thing we can actually relate to, learn from?

Despite all the
heated discussions over the internet as to whether "we" (
Cameroonians), should just "leave it alone", or take it as a sign of
"good luck" for the tournament…, what really caught my attention are
the lyrics of the Shakira version. A friend of mine posted this on his
Facebook page: "This time for Africa….Une phrase qui dans cette
chanson me donne des frissons et surtout entretien mon espoir. Your
time will surely come Africa; sooner than you expect. Get back to the
Lord YESHUA. Love Africa" Which translates (since we are talking about
plagiarism here), This time for Africa … a phrase in this song that
gives me the chills, and most of all helps me maintain HOPE.

Last
December, the African continent caught the attention of the world as a
Nigerian attempted to bring down a plane on Christmas day in an act of
terrorism. We've heard about the Cameroonians that were arrested for
pharmaceutical fraud on the East coast. Lema discussed on this blog the
negative image our beloved continent has because of the way some
individuals misuse their God given talent. It is about time for
positive publicity and it is nice for a change. Not only is an African
country is hosting the Soccer World cup tournaments, but the Official song, as it
turns out for the whole world to see, was originally written by a group
from that continent as well, and for once, Africans are not being
accused of wrong doing. It is also important to point out that it
speaks volume of the talent, that a song written more than 2 decades
ago, still has such a far reaching effect.
Although I am not in
denial about the veracity of  the documentaries on CNN and MSNBC about African con artists, I am still wondering if and when there will be an
equal elaborate analysis of African success stories that affect nations,
like the United Kingdom for example where Three Nigerians
have recently won parliamentary seats; could we
retrace their journey to such an important position and shine the light on
the road that brought them there? I believe that these stories of hard
work and heroism are not isolated and that the world could learn and
benefit as much, if not more, from them than the stories on how to
avoid being scammed.

As I am listening to the Shakira tonight,
I can't help but shout with her: "THIS TIME FOR AFRICA!" . This is your
time to arise, shine and be redefined. To replace the labels of
corruption, scam artists, fraud by more accurate ones. Should we even
mention that it is time another image be shown, other than the poor
skinny kids with big stomachs, walking by the side of skinny cows and
surrounded by flies? It is time to show that children of that continent
are talented musicians, artists, soccer players … that they can use
their intelligence to achieve much more than elaborate scams. "When you
fall get up oh oh, if you fall get up eh eh, Zaminamina Zangalewa, Cuz
this is Africa"  Slavery, famine, civil wars, dictatorship, corrupted
governments … are not going to define you anymore. This is your moment!

As
a child I didn't very much understand the lyrics of the song by the
Zangalewa, I loved the music, still do; today, as I am enjoying this
new version, I like the words even more, as they have a special meaning
to me. I can relate to them, and I am sure everyone, African or
not, can get something from them as well. Enjoy this video with lyrics of the song