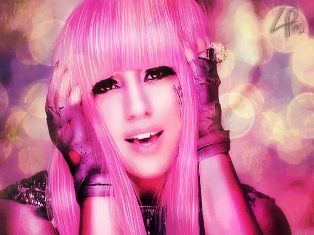 Born as Stefani Germanotta on March 28, 1986 to Italian American parents Joseph and Cynthia Germanotta in New City, Lady Gaga had what most would call a privileged childhood.  With mostly A grades, disciplined and generally a good student and kid, her love for music and art was evident at an early age as she began playing piano at the age of 4 and grew up listening to music and entertaining. Her parents being avid music lovers, 'brought all kinds of music into the house' she says. Insecure and feeling out of place in school because of her style which others perceived as weird and provocative, she felt out of place amongst her school mates, but never at home, where she practiced and performed at every chance she got.She attended a catholic high school and went on to The New York
University's Tisch School of Arts where she gained early admission at
the age of 17. In her sophomore year, she decided to drop out of college where she was studying music and art – she felt much more advanced than her classmates, and had a desire to go out and get involved in the entertainment industry.

Success did not come as easy or as readily as the artistic and well educated Stefani thought it would. She was signed by Def Jam records at the age of 19 but dropped 3 months later. Partnering with song writer and producer RedOne, she went on to form a band, which performed in low class nightclubs in the New York area.

Depressed and broke, she pressed on performance after performance as she sought to form connections with industry insiders. Her performances evolved with her. In her struggles, she became involved in drugs and sunk deeper into depression. Ties with her family were becoming strained as they found it difficult to understand why she was making these choices.

Music producer Fusari recognizing her talent, worked with her in writing songs earlier in her career, and helped her coin the name Lady Gaga as a stage name. Through Fusari, she eventually was signed by Vincent Herbert of Interscope Records – a major label. Things were beginning to look brighter. Eventually, she struck a deal writing songs for Britney Spears, Fergie, New Kids on the Block and the PussyCat Dolls. She has the talent, yes; she could write great music, yes, but no one was willing to take her to the next level. Gaga had not found her grove yet.

Word of her vocal abilities got to super-star, songwriter Akon through a friend. Akon gave her a chance to sing a reference vocal on one of his songs and immediately, picked up the superstar in Gaga. She was a 'gold mine' with a lot of potential. Working fast, sharp business mogul Akon persuaded Interscope for a joint deal and signed Gaga onto his own record label Kon Live Distribution.

You only get one chance to make an impression.

After signing with Akon's label, Gaga immediately went to work with long time friend RedOne on her debut singles 'Just Dance' and 'Poker Face'.  A party song, with high energy lyrics and beats, written by Gaga  Just Dance released in 2008 was an immediate success. Featuring Akon in the vocals and music video, Just Dance topped the music charts in several countries worldwide, reaching number one in countries like the United Kingdom, Australia, Canada, Ireland. In the United States, it spent almost 5 months in Billboard's top 100, finally reaching number one in January 2009. It currently holds the record as 3rd biggest selling digital song of all time. Just Dance received a Grammy nomination in 2009.

Gaga was well on her way. Just as the world was wondering who this young unknown superstar was, came Poker Face (also produced by RedOne), reaching even greater heights. With more positive reviews Poker Face swept the charts, reaching number one in 17 countries including the U.K and the U.S. It has claimed it's spot in history as being the most downloaded song in British Chart history. It is one of the most successful songs in music history to date, earning Gaga 2 Grammys in 2009.

With 78 awards worldwide under her belt from over 150 nominations, Gaga is understandably today, the hottest young pop star … with another number one billboard hit 'Telephone' featuring Beyonce as we speak.

Always be yourself. Who is GAGA?

Attention to detail: Known to be very eccentric, over the top, unpredictable, wild, colorful, 'freakish' – whatever that means, Lady Gaga never shies away from expressing herself in her performances. Her every 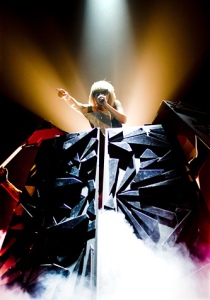 performance is well thought out and put together  – from the song, the stage, the hairdos, the moves – it is all art created and presented by her production team called Haus of Gaga which she oversees. Gaga pays attention to every detail.

A representation of life: She says each of her songs represents a definite and true part of herself, which she conveys in her music. Drawing from an inner wild artistic and fashion sense, Gaga shows the world who she really is, which is what glues fans to her worldwide. Her songs, her performances are a story and each time she gets on stage, she tells those stories in the best way she can by the designs. To the world, it might just be another great performance or appearance,
to Gaga, it is a message, one which resonates with millions and is often
very difficult to forget. If life is eccentric, she performs an eccentric show.

Towards the end of 2008 and in early 2009, the buzz about Lady Gaga was definitely at an all time high … backed by wild, often hard-to-make-sense of fashion statements especially at the Grammy's of 2009 which made headlines in the media.

Upon her introduction to fame she was ridiculed by some fellow celebrities who brushed her aside as an over night success and embraced by others. The most notable was this comment by Christina Aguilera in responses to comparisons between the superstar and the new pop sensation: "I am completely unaware of her (Gaga) and didn't know if it was a man or a woman," Aquilera said.

When your work speaks for itself.

During those months of Gaga fever, I was busy traveling the world on business, several trips to Europe and Africa and never really paid attention to this newest superstar. To be honest, I too thought she was just a young frivolous girl trying to make a name for herself, she wasn't going to last.

Then one November day, as I was watching TV, looking to catch up on the latest hits in music, I came across the video of Bad Romance by Lady Gaga playing. Immediately I stopped, captivated by the song and as I watched Lady Gaga in that video, I began to understand why there was so much talk about her. Instantly, I could sense the European pop influence in that song, the true melodies, my heart embraced it and she took me to this place of 'Wow, OMG!' … to a lover of real beautiful music, Bad Romance was magic to my ears. The sheer creativity of the video and genius of Bad Romance absolutely captivated me. It had been a while since I had been this impressed. My collection of music mostly includes old-time hits like those by Roxette, Madonna, MJ, Irene Cara, ABBA, Bonnie Tyler, Eurythmics, Elton John, Celine Dion … and here I was listening to another masterpiece, a classic in this day and time. It was unbelievable. 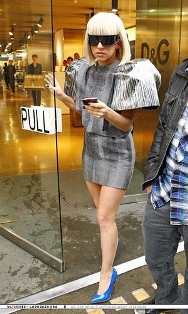 I began to talk about her incessantly to my husband – the one who is always there to listen to me go on and on about the things that make such an impression on me.

I too was now a Gaga fan, well into the Gaga grove.  My kids began to catch the fever, Gaga's music was now being played over and over at my house. One of our anthems was Poker Face, which is so funny because my two year old son also smitten by Gaga refers to her as Gu-gu Gaga. It makes me laugh so hard … he just can't get the Lady.

Whether you are a fan or not, to most music lovers, Lady Gaga is the real deal. Take away the wildness and craziness and you will be left with real music, with a young lady who has worked her way up and earned a place on top of the music world. She has earned every single moment she now enjoys on the world stage, where she can now truly be who she is. "I am not a song, I am not moment, I am an artist," she says.

Meanwhile, I must says, she has made fans of all generations and keeps breaking records, recently being recognized as the first artist ever with more than a billion views for her videos on YouTube. Underneath it all, is a young Italian-American girl, who just wants to give the best she's got and entertain. Once again, Lady Gaga's story and 'lessons learned' is one of big dreams, resilience, hard work and patience.

I'll leave you with my favorite Gaga hit: Bad Romance.