The Heart of a Champion: SERENA WILLIAMS

YOU ARE A CHAMPION Serena Williams was born on September 21, 1981 in Saginaw, Detroit of Richard Williams and Oracene Price. She is the youngest of five sisters, who were raised as Jehovah’s Witnesses. She grew up in Compton, a suburb of Los Angeles and started playing tennis at the age of four, under the coaching of dad Richard; they have talked about ducking gun bullets in the poor neighborhood they grew up in as they practiced on community tennis courts.

Serena and big sister Venus are known worldwide for great achievements especially in tennis. In total, Serena has 23 Grand Slam titles under her belt: 11 in singles, 10 in women’s doubles and 2 in mixed doubles; plus 2 Olympic gold medals in women’s doubles.

Serena made her mark back in 2002 and 2003 when she won five of six Grand Slam events she entered, becoming the 5th woman in history to holdall four Grand Slam titles simultaneously. Serena Williams has won more Grand Slam titles than any other active female player in the world today. She has won more career prize money than any other female athlete in history. She is currently the number one female player in the world of tennis, a position she regained in November of 2009. I have watched several athletes at work, giving the best they got to win competitions. Yet the one thing that continuously draws me to this young champion is the fight in her. I really started watching the Williams sisters closely in 2001 and immediately, it was obvious that Serena was and still remains a fierce competitor. The fire in her eyes when she competes, her determination to beat the person on the other side of the net and her sheer tenacity have had me and many in the tennis world mesmerized. True, she is known to have the best or one of the best double-handed backhands in female tennis and of course her forehand is obviously among the most powerful. When the stakes are high, Serena is known to always rise to the challenge. She excites and pulls us into the courts with her. We struggle with her, fight with her and win or loose together. Like most champions, she almost always delivers … and when she doesn't, we all know she gave it her best.

We have watched her come back and win matches that were all but lost. One thing that her fans are sure of is that it is never over until it is over with Serena Williams.

It is not uncommon to see her between games reading notes she seems to have written to herself, notes that she says are positive affirmations that help keep her mind focused on the task at hand. From watching her do this, I began to understand the power of the things that we say to ourselves, even in the face of challenges. 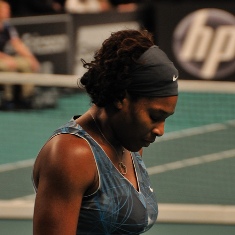 Long before Serena and big sister Venus became tennis superstars, their father believed they were going to be. He predicted several years before it happened that his daughters were going to be ranked number one and number two in the world one day. Many did not see it, could not imagine it, laughed at him and thought he was crazy; and so when it happened, he definitely was laughing last. His daughters have since then all but dominated the tennis world.

It has not always been smooth for Serena.  Sometime in 2003, she was forced to take a break from the sport due to a knee injury. When she came back in 2004, her results were not nearly as good. Although, she was able to win another Australian Open title after 18 months, injuries continued to plaque her, and her rankings continued to slip, dropping to as low as #140 in July 2006. The buzz in the tennis world was that she had passed her peak and her good days were gone.

But being the champion that she is, in January 2007 at the Australian open ranked at #81 in the world, Serena shocked the world when she snatched the title again. Sending a loud and clear message to all that she wasn't done yet, she worked her way back up and in September 2008, Serena Williams reclaimed her number 1 title.

Like everyone else, champions fall sometimes, the thing about them, is that they always rise again. Always, always, always …they do, until they decide it is over.

Although Serena Williams has had a great share of controversies that have plagued her, what makes her really great is that you can always expect her to bring her A-game. 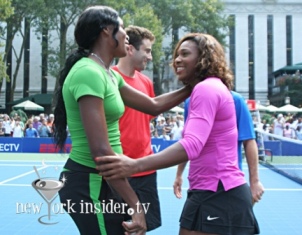 The world never knows what this young Williams sister will show up wearing. Her flashy, unique and often times unusual outfits on the courts have made numerous headlines in the past. In fact, we watch expectantly, curious about what she would show up in. Conspicuous ‘bling’ jewelry, skin tight jerseys and all, Serena has a big personality off the tennis courts as well. Her business portfolio includes fashion – she owns her own fashion line called Aneres (coined from spelling her first name backwards). She recently
also launched her skin care line. Towards the end of 2009, she released her autobiography in a book entitled ‘On the Line’. She has dipped her toes in acting and plans to do much more.

She has a great heart, charity work is a part of her life – most noticeable in Kenya, and here in the United States where she focuses especially on at-risk youths.

When all is said and done, this 28 year old jewel has conquered all odds in an almost all white sports, where she has excelled and continues to show us that it is truly possible to reach heights you dream of. She continues to inspire millions across the world to be champions. She brings excitement to the game of tennis and I am glad to say she has touched my life from afar.

Here is a word from Serena Williams: Championship: I am Serena on her blog. Watch out for comment #6.