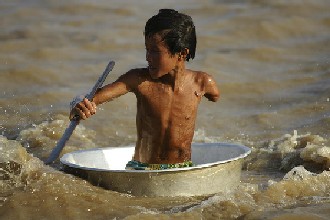 As the events in Haiti continue to unfold, the
viewer's tears are often in sharp contrast to tearless Haitian faces on
the screen. Having absorbed hundreds of images over the last few weeks,
some kind of associative patterns are now attached to various clips on TV:
Haitian, earthquake, disaster, aid, relief…. and resilience.

The
Merriam-Webster dictionary defines resilience as (1) the capability of a
strained body to recover its size and shape after deformation caused
especially by compressive stress and (2) an ability to recover from or
adjust easily to misfortune or change.

Looking over Haiti's history from the era of slavery to the present, you will notice that the country has been besieged by a series of
disasters; both man made (under a corrupt leadership), as well as natural
(4 hurricanes in 2008, this massive 2010 earthquake and past tsunamis are just
examples).  The island is often known to be be the poorest country in
the western hemisphere, yet the people of this country keep fighting
to not only survive, but to thrive, just as they fought against all odds to
obtain their independence more than 200 years ago.

It was no surprise
then to see Haitians a few short hours, a few days after such an immense
tragedy, get back on their feet and start digging through the rubles to begin
their own rescue efforts, organize themselves in tent cities, start to
trade again for basic needs, wipe their tears, and just ….move on.

This
is not yet another article on "Haiti's earthquake". I think that as human
beings, leaders and aspiring leaders, constantly looking for new ways
or more dependable ones to succeed and be better, we have a lot to learn from the people
we call today "victims". We have to learn to be resilient.

“We
find that people's beliefs about their efficacy affect the sorts of
choices they make in very significant ways. In particular, it affects
their levels of motivation and perseverance in the face of obstacles.
Most success requires persistent effort, so low self-efficacy becomes a
self-limiting process. In order to succeed, people need a sense of
self-efficacy, strung together with resilience to meet the inevitable obstacles and inequities of life." Albert Bandura.

Does
it mean that just because we stop considering ourselves victims we
will not face difficulties and/ or failures? No, but like one fisherman
in the city of Petit Paradis who was hit by a localized tsunami after the
earthquake, said: " What can I say? That's life". The successful person
and leader of tomorrow is the one who knows how to bounce back from a
hard fall.

Warren Bennis, an American scholar, known for his pioneer
studies in the field of Leadership says: “The
leaders I met, whatever walk of life they were from, whatever
institutions they were presiding over, always referred back to the same
failure, something that happened to them that was personally difficult,
even traumatic, something that made them feel that desperate sense of
hitting bottom — as something they thought was almost a necessity. It's
as if at that moment the iron entered their soul; that moment created
the resilience that leaders need.”

So
as we watch Haiti and our hearts go out to them and we suffer with them
as though we were all sons and daughters from that country, let's learn
from them and with them. Although the island lost the outside beauty
that once appealed to tourists, we can still be swept by the inner beauty
that the Haitians have shown us for hundreds of years and every single
minute for 11 days now; their sense of resilience, their ability to
fall and get back up; the strong willingness to thrive and succeed.
Let's mourn with them, and learn from them and this tragedy would not
have been in vain!

2010-01-29
Previous Post: How to Deal with Pressure in Network Marketing
Next Post: Robbing the Grave of Its Greatness